Our mission is “To be a national centre of excellence in the conservation, interpretation and acquisition of the Island’s dinosaurs and diverse geological heritage.”

For nearly a century the Museum of Isle of Wight Geology, above Sandown Library, housed the Island's geology and fossil collections.

On August 10th 2001 this changed with the opening of Dinosaur Isle, a purpose built interactive museum which replaced the old museum.

Dinosaur Isle provides the space and facilities to properly display and conserve the rich geological collections. Dinosaur Isle is managed by the Isle of Wight Council and cost £2.7 million, half of which was provided by a Millennium Commission grant.

The new museum is located on Culver Parade, a short distance from the old building, and was designed by local architects Rainey Petrie Johns in the shape of a giant pterodactyl.

The interior was designed by Leicester based Haley Sharpe Design, who employed an array of sub-contractors to make everything from showcases to rock re-constructions to full sized fleshed dinosaurs!

Opening times vary throughout the year

We are closed between 24th December to 26th December and on the 1st January. 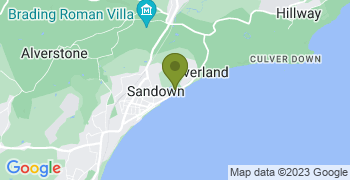